This series pilot introduces the main good guys (Questar, Yungstar, Serena, Gunner, Turret, Mind-Zei, and Llahd) and bad guys (Krulos, Rasp, Hammerhead, and Antor) in the midst of a space chase. Our heroes use their experimental S.T.E.P. to escape their enemies by time traveling back to Prehistoric Earth. It is only after they have begun to build a settlement that they learn that the Rulons went back in time with them and are building a brain boxed dinosaur army. Can the Valorians build up their defenses in time for Krulos's first attack? 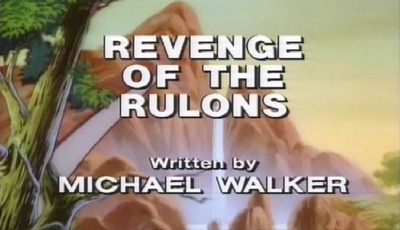 Yungstar and Serena bring an injured Stegosaurus back to camp. He's one of the only dinosaurs that doesn't run away when an earthquake hits and severely cripples the Dino-Riders' defenses. Gunner and Tagg's attempt to corral their dinosaurs causes Llahd to be captured by Rasp. When the Rulons' ultimatum is delivered to Questar, he implements a plan that gives the Stegosaurus a chance to help save the day. 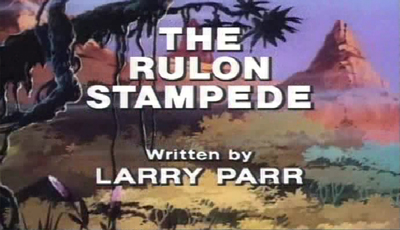 The Dino-Riders have two crises to contend with today. The first is a severely weakened Serena hovering near death after healing one to many dinosaurs. The second is the unstoppable army of brain boxed dinosaurs Krulos is building to stampede through the Dino-Rider camp. Questar's creative handling of the S.T.E.P. crystal holds the key to dealing with both situations. 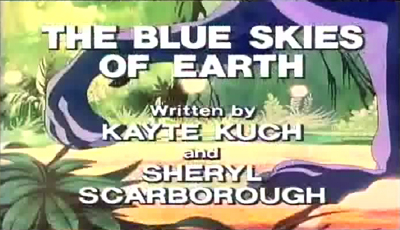 Yungstar's flying antics keep getting him into trouble in front of his rival Aero. Eventually, he leaves camp to tend to his bruised ego and flies right into the Rulon army. Hammerhead has created a large airforce for Krulos that includes the world's largest Pteranodon. Somehow, Yungstar must return to camp and help the Dino-Riders' new air trainees defeat this new threat. 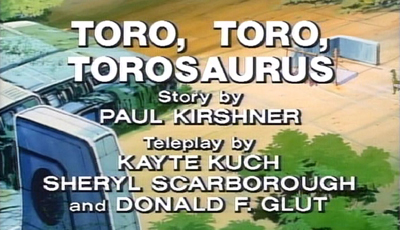 Llahd's attempt to show his worth to the Dino-Riders in battle nearly costs him and Tagg their lives. He runs away to prove that he can be a hero all by himself, but can't help a trapped herd of Torosauruses alone. Meanwhile, the camp is left at half strength while his people go out in search of him. The Rulons take advantage of the ship's vulnerability and launch an attack that the Dino-Riders cannot overcome without reinforcements. 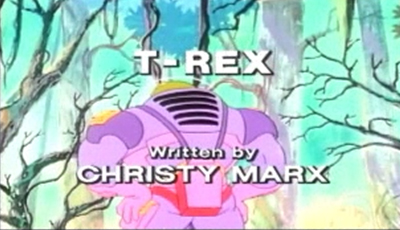 The T-Rex has received a weapons upgrade that Krulos is eager to test in the field. The Dino-Riders are no match for the dinosaur's fearsome arsenal and very nearly lose the S.T.E.P. crystal. Turret gets close enough to shoot off the brain box but doesn't celebrate with the others - he's been feeling useless lately and considers this a lucky shot. But he gets the chance to regain his confidence when Krulos lures an entire family of T-Rex into the Dino-Riders' camp. 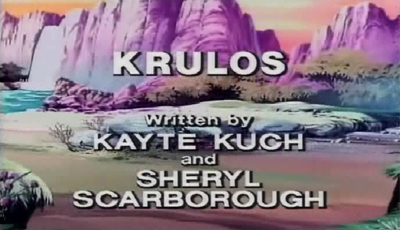 An earthquake takes place that severely injures Krulos during his ambush of a small band of Dino-Riders. His top three commanders quickly dismiss his case as hopeless and start squabbling over who will take his place as leader. Later, Serena is captured during her search for a wounded being. It's up to Questar, Mind-Zei, and the commandos to infiltrate Dreadlock and free her. 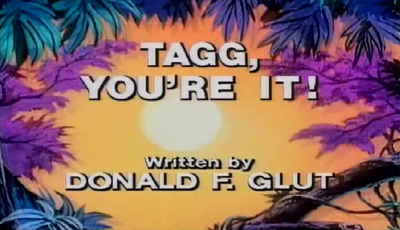 The Dino-Riders are perplexed by a recent onslaught of peculiar earthquakes. When Tagg goes to help some thirsty dinosaurs reclaim their watering hole, he stumbles upon a Rulon tunneling operation that is responsible for the tremors. Although Tagg is captured by the Rulons, Llahd gets away and alerts Questar to the trouble. Our heroes must find Tagg and stop their enemies before the tunnel breaks through the bottom of the ship. 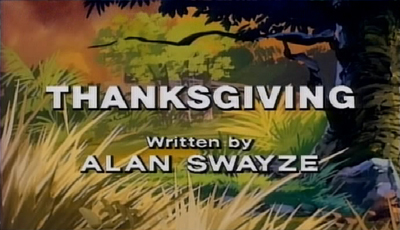 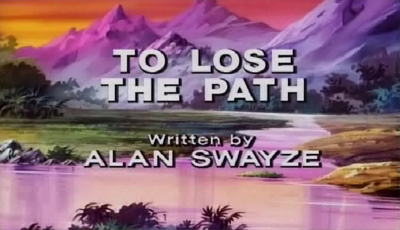 Rasp's work on a new pulse cannon at the Rulons' weapons refinery causes some chemical waste to be disposed into the river. Many dinosaurs fall ill because of this pollution; Yungstar becomes so infuriated that he doubles his resolve to end the Rulon threat once and for all. His hatred grows so intense that he loses his ability to communicate telepathically. Somehow, Yungstar must reclaim the Path before he is hunted down by Krok and Lokus. 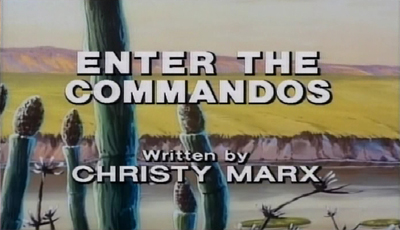 The commandos — led by an overly confident and independent Astra — stop Hammerhead from stealing a nest of Triceratops eggs. Upon learning that many nests have been found empty in recent weeks, Questar sends Astra's team to Dreadlock to learn the Rulons' plan. It turns out that Krulos has stolen the eggs as part of a scheme to raise a large Triceratops army. Can the commandos deal with the problem without the help of the other Dino-Riders? 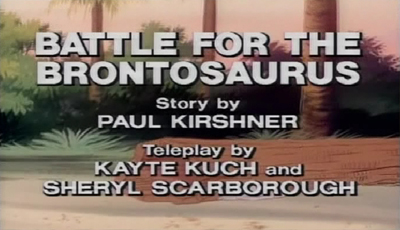 (Part 1 of 2) Both sides race to track down a mammoth Brontosaurus to add to their ranks. The commandos manage to find the animal first, but Hammerhead and Skate show up with a hunting party and a potentially fatal tranquilizer. It's going to take some clever maneuvering for the good guys to get the Brontosaurus safely back to camp. Meanwhile, Krulos implements a subtle scheme to cripple the Dino-Riders' leadership. 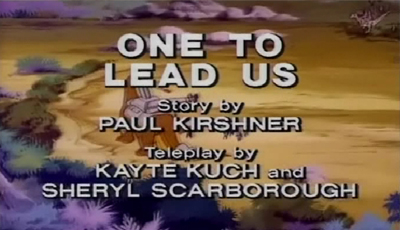 (Part 2 of 2) Suspected of secretly dealing with Krulos, Questar shocks his people by refusing to submit to Trial by the Path. He enters voluntary exile until he can clear his name and leaves Gunner, Mind-Zei, and Icon in command. But without a single leader to guide them, the Dino-Riders are helpless in the face of Krulos's most severe assault to date. The Rulons' victory looks assured once the Brontosaurus is brain boxed, yet the few Dino-Riders who manage to escape renew their hope of survival thanks to an unexpected source of help. 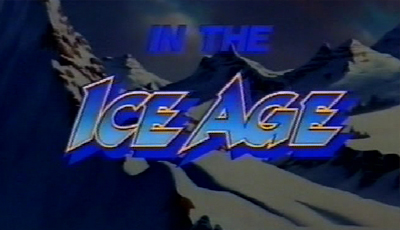 The Rulons attack the Dino-Riders' camp just as they manage to successfully reactivate the S.T.E.P. on its new command center. When the victory is about to go to the Rulons, Astra and the commandos transport the S.T.E.P. to the safety of another time. But a miscalculation brings them to the Ice Age and in the middle of a war between some peaceful Cro-Magnons and a greedy tribe of Neanderthals. The commandos now have two missions: help their new allies defeat their enemies, and devise a plan to beat back Krulos' latest attack. 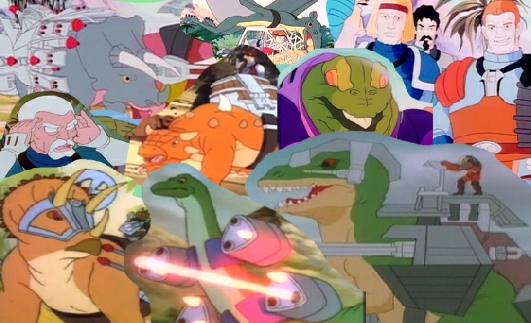